The emergent disease non-alcoholic fatty liver disease (NAFLD) predisposes for diabetes and cardiovascular disease as well as liver cirrhosis and hepatocellular carcinoma. According to a seminal concept presented by Day & James in 1998, the progression of NAFLD is characterized by two hits. The first hit is a fatty liver in the form of a potentially benign and reversible hepatocellular deposition of triglycerides. It may progress towards non-alcoholic steatohepatitis (NASH) if the second hit occurs: increased exposure of hepatocytes to reactive oxygen species and inflammatory cytokines, leading to hepatocellular death and irreversible re-modeling of the liver tissue.
Paracrine signaling loops confined to the adipose tissue and the liver along with bidirectional interactions between insulin-resistant, inflamed adipose tissue and the diseased liver as mediated by the release of adipose-derived hormones, inflammatory cyto- and chemokines, free fatty acids and hepatokines (e.g., FGF21, fetuin-A, IGF and IGFBPs, selenoprotein P, SHBG) have been recognized as key pathogenetic drivers in the progression of NAFLD. Pro-inflammatory and pro-atherogenic mediators produced in the adipose tissue and the liver create a systemic state promoting peripheral insulin resistance, diabetes, and atherogenesis in the vasculature. Apparently, the amount of liver fat, but not the amount of subcutaneous abdominal fat, visceral fat or intramyocellular lipids, describes a distinction between insulin-sensitive obese people with almost normal intima media thickness (IMT) of the common carotid artery and insulin-resistant obese people with a significantly increased IMT. As demonstrated in the RISC (relationship between insulin sensitivity and cardiovascular disease) population of apparently healthy people, the prevalence of a fatty liver associates with insulin resistance (as measured with the hyperinsulinemic euglycemic clamp technology), coronary heart disease risk, and signs of early atherosclerosis.

Profil and clinical trials on NAFLD

Profil has all the relevant tools available for exploratory mechanistic and early-phase clinical trials addressing NAFLD-relevant endpoints in apparently healthy people that are at risk and in patients with diabetes.
As a member of CBmed (the Center for Biomarker Research in Medicine), Profil is in the position to connect our integrated service portfolio with advanced “omics” analytical platforms. Via CBmed, we have access to one of the largest European biobanks, a digital pathology platform and bioinformatics tools.
Interested to learn more about NASH or NAFLD? Then click here and check out our online seminar on the topic. 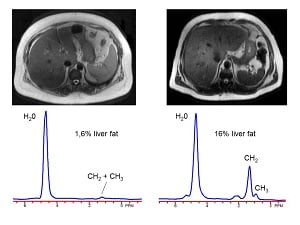 Non-alcoholic fatty liver disease (NAFLD) is an emergent disease that predisposes for diabetes, cardiovascular disease, liver cirrhosis and hepatocellular carcinoma. Profil has the expertise to support clinical investigations of NAFLD with methods including; MRT- and MRS-based quantification of liver fat and assessment of the hepatic energy metabolism; quantification of endogenous glucose suppression and hepatic insulin sensitivity by means of a two-step hyperinsulinemic euglycemic clamp; addressing the metabolic communication between adipose tissue and the liver with an integrated methodological approach combining indirect calorimetry, breath tests, glycerol kinetics and air displacement plethysmography; measurement of fat and glucose oxidation via indirect calorimetry combined with a highly standardized dietary regimen; assessment of lipolysis (microdialysis, glycerol kinetics) and hepatic VLDL secretion; comprehensive and specifically tailored blood-based assaying of biomarkers and surrogates guided by a pathogenetic concept; blood sampling for the profiling of fatty acid signatures in the plasma-free fatty acid fraction; IMT measurement; preparation of adipose and muscle tissue biopsies for comprehensive or specifically tailored gene expression and histopathological analyses; and preparation of muscle tissue biopsies for analyses of mitochondria and oxidative metabolism.